The Curse of Senmut (Book 1 of The Ardis Cole Series)

Mystery writers and sisters, Vickie Britton and Loretta Jackson, are co-authors of more than 40 mysteries, suspense, and western novels, plus numerous short stories, and the adventure continues in their first edition of The Ardis Cole Series: The Curse of Senmut. Good clean reading for all!

The Curse of Senmut (Book 1 of The Ardis Cole Series)

Outside a small village near the Valley of the Kings, archaeologist Ardis Cole arrives in Egypt to help excavate a tomb recently discovered by her mentor, Jane Darvin. When Jane is murdered, Ardis must assume responsibility for the project.  With the help of mysterious Blake Lydon, she must unravel the tomb’s mystery—an ancient secret concerning two miniature obelisks of gold hidden by Queen Hatshepsut’s love, Senmut, over 2000 years ago.  As Ardis uncovers the ancient mystery, she finds herself drawn into a modern action tale of hatred, murder, and revenge.

This first book in The Ardis Cole Series is set in the exotic location of Egypt, near the Valley of the Kings. Archaeological exploration and excavation has been on the rise in this area since the end of the eighteenth century. Here tombs and ancient buildings are encased within the mountains and are decorated with scenes from Egyptian mythology that give clues to the mysteries of the ancient royal figures.

Britton and Jackson are available for book signings and book club discussions.

18 reviews for The Curse of Senmut 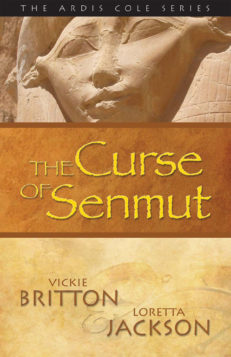