Consider Me Dead (Book 8, the final installment of The Ardis Cole Series)

Mystery writers and sisters, Vickie Britton and Loretta Jackson, are back! Co-authors of mysteries, suspense, and western novels, plus numerous short stories, and the adventure continues in this eighth edition of The Ardis Cole Series: Consider Me Dead. Good clean reading for all!

Consider Me Dead (Book 8 of The Ardis Cole Series)

A troubled teenager, Jenna Carrington, leaves her father a note to consider me dead before she runs away from home. Five years later the skeletal remains of a female murder victim are found in the river near Sydney, Australia. Archaeologist Ardis Cole traces Jenna’s flight to a homeless shelter on the outskirts of the city. Safe Port’s manager, Quentin Trebb, seems to know more about the missing girl and some rare black opals stolen from her father’s safe than he is willing to reveal. The investigation takes Ardis to Majeri, an Aboriginal settlement in the outback. There, entangled in the dangers of the bush, Ardis finds herself the next target of a vicious killer, stalking her every move, waiting to strike again.

Britton and Jackson are available for book signings and book club discussions.

Be the first to review “Consider Me Dead” Cancel reply 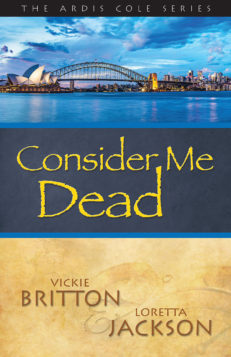