The Destruction of Neva

eBook, Softcover
Rated 5.00 out of 5 based on 3 customer ratings
(3 customer reviews)

The Destruction of Neva (Book 5 of The Ardis Cole Series)

Mystery writers and sisters, Vickie Britton and Loretta Jackson, are back! Co-authors of mysteries, suspense, and western novels, plus numerous short stories, and the adventure continues in this third edition of The Ardis Cole Series: The Destruction of Neva. Good clean reading for all!

The Destruction of Neva (Book 5 of The Ardis Cole Series)

Ardis Cole is summoned to Russia to help Grant Merlin’s friend, Nikolai Savik, locate a priceless marble statue called Neva. The life-sized sculpture vanished along with the artist, Nikolai’s uncle Treve Savik, seven years ago. Most people believe Treve destroyed his masterpiece then committed suicide after being jilted by the statue’s beautiful model, Varina Morinsky. On the way to the Savik mansion Ardis is nearly pushed to her death in the Moscow subway. Once in St. Petersburg instead of finding the sculpture, Ardis discovers the grave of a murder victim, buried for seven years. The search for the missing sculpture becomes a hunt for a dangerous killer—one who will not hesitate to strike again.

3 reviews for The Destruction of Neva 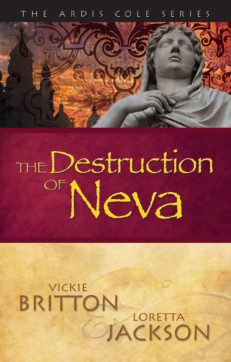