eBook
Rated 5.00 out of 5 based on 6 customer ratings
(6 customer reviews)

A Glimpse: The Truly Excellent Scepter is an ebook that bridges Book II of the Trinity Tales of Tresia Series and Book III, A Perfectly Magnificent Cane. A Glimpse also appears at the beginning of Book III.

Ebook is available only through Amazon .

A Glimpse: The Truly Excellent Scepter is a fascinating glimpse into the world that is awaiting believers upon their death.

Have you ever wondered what happens after your last breath on earth? In this short allegory, based on the author’s Trinity Tales of Tresia series, Winny’s grandmother is taken on a journey into the Realms of Tresia, past, present, and future. Whether or not Gran has left her old body to enter a new spiritual body, she isn’t sure. But she knows something has changed.

The journey begins when Gran leaves the beloved farmhouse where she had lived her entire life and where she spent hours in her Kingdom Corner speaking Wind Words over her family. After she views scenes from her earthly life and past journeys to other realms of Tresia, she meets her childhood friend and guardian, HuLi, who is also a mighty Messenger of the T’sabah, the army of the Garden Realm. He takes her for a ride on his Winged Beast, Tundra, a huge white tiger. They land at a magnificent estate that strangely resembles her old homestead. She experiences the heavenly family reunion she has waited and longed for, with those she loved most in the Earthen Realm.

Next, Gran climbs the Stairway of Truth where she is shown three Glimpses. First, of a long ago rebellion and battle that destroys everything that had been before. But then, she witnesses the amazing re-creation of Tresia. Second, Gran visits the beautiful glistening Gem Mines hidden below the Earthen Realm. But she doesn’t quite understand what she sees there. Third, she finds herself on a mountaintop. Secrets are revealed and some of Gran’s questions are answered, but she learns about a hidden mystery saved for the End of Days.

Last, Gran is reunited with three Samoyed dogs, Winged Beasts that she knew and loved in the Earthen Realm. True, they had shared fantastic journeys together, but Gran also lived everyday life on the farm with all three pets. Gran’s final journey begins on Glimpse Mountain where she is given a final vision and presented with a choice. Her heart is pulled in two directions, but how will Gran’s decision affect her granddaughter, Winny? It could change everything for both of them.

A Glimpse is a story for all generations that will leave adult readers wanting to discover and share more about the Realms of Tresia as they ponder their own future and those of the children they love.

This book is only available as ebook through Amazon.

Praise for A Glimpse

“Based on the Trinity Tales of Tresia series by J.A. McPhail, A Glimpse: The Truly Excellent Scepter was a fascinating glimpse into the world that is awaiting believers in Christ upon their death. The author uses beautiful word pictures to describe the majesty of heaven through the eyes of “Gran” who experiences one adventure after another. The truths of Scripture are skillfully woven and hidden throughout. My favorite lines were: “I’m really here,” I whispered. I clung to him, my arms encircling his broad shoulders. I remembered hearing that there were no more tears in the Garden Realm. They must have meant sad tears, because I discovered that tears of joy still existed. For any who have ever wondered about the purpose of life, this is a must read.” —Rosie J. Williams, Author of Repurposed Faith, www.rosiejwilliams.com, Topeka, KS

“A Glimpse: The Truly Excellent Scepter brings to life for the reader, a world extravagantly beautiful and filled with imaginative scenes. In this short heavenly allegory based on J.A. McPhail’s Trinity Tales of Tresia series and told in the grandmother’s voice, one can inhale and be in the midst of it all. Life lessons shared with Gran’s Young Ones have followed them into adulthood, and the battles they have all valiantly fought thus far, prove the courage found within their hearts for the journeys yet to come.” —Debra Leigh Cloer, freelance writer and columnist, Morganton, NC

J.A. McPhail is a published author and a member of the Morganton Writers’ Group, North Carolina Storytelling Guild, and the Society of Children’s Book Writers and Illustrators.

Jeannie’s first book was published in 2012. Dawn of Day is a middle-grade historical fiction novel about the Free State battle and the Underground Railroad in Kansas. Her second book, published at the end of 2013, is a memoir about her daughter, Stacie, titled, I Will Not Fear: A Chosen Life.

Jeannie’s job experience includes serving as a managing editor for a women’s newspaper, editor and photographer for a real estate magazine, music teacher, and public library director. Over the past 25 years, she has written hundreds of articles for various newsletters and newspapers, including several years writing for the Morganton News Herald’s “Burke County Notebook” column.

Jeannie is a native of Kansas, where she married her high school sweetheart, Dennis McPhail. Dennis is a high school counselor, choral director, and coach. They sang in the Messengers Quartet of Silver Lake, KS, for over 23 years. In 2002, they moved to NC and joined their daughter, Stacie, singing together for nine years as a family trio called The Macs.

6 reviews for A Glimpse 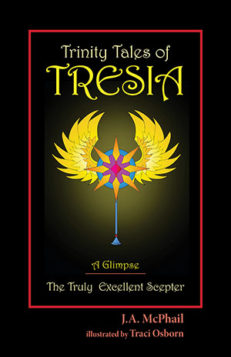