eBook, Hardcover, Softcover
Rated 4.91 out of 5 based on 11 customer ratings
(11 customer reviews)

A historical fiction book based on actual people, places, and events in Kansas’ history. The book tells the story of Wabaunsee County and its ties to bleeding Kansas and the Underground Railroad, featuring the Mitchell family in particular. It covers the time from 1856 to 1932. Dawn of Day includes discussion questions and activities related to the book and for further study.

Book is also available through Amazon and BN or ask for it wherever books are sold. The ebook version of this book can be ordered through Amazon for $2.99! Look Inside

Henrietta never liked history. But on a late summer day in 1932, she and her sometimes annoying little sister Irma Jean, hear an exciting true story from their artist friend, Maude Mitchell—a story that takes them back in time 75 years.

In 1856, Maude’s father, William Mitchell, came from Connecticut to support the Free State cause in Kansas. William and his sister Agnes hid runaway slaves in their cabin, including Jesse and Abby, two slave children who’d been cruelly separated from their mother.

Henrietta had learned about the Underground Railroad at school, but she never realized how dangerous it was for everyone involved. But what has slavery got to do with the family secret and Aunt Jo being mad at her parents?

As the pieces of the puzzle begin to come together, Henrietta discovers a surprise from the past that nobody dreamed was possible.

Part of the proceeds from Dawn of Day are going to Mt. Mitchell Heritage Prairie. You can read all about this wonderful local history preservation project at their website: http://mountmitchellprairie.org/

Praise for Dawn of Day

“Set in a time when children still rode horses to school, Dawn of Day is an enchanting story about family history being passed on from one generation to the next. Based on historic events during the turbulent period of our nation’s history known as ‘Bleeding Kansas’, this is a book that is interesting, entertaining, and educational. It’s not often that one book successfully combines all three.” —Michael Stubbs, Kansas Historian

“Dawn of Day is an engaging introduction to a little-known part of Kansas history—the pre-Civil War immigration of abolitionists into the Territory to help ‘Bleeding Kansas’ join the Union as a free state. The book offers a fictional but realistic glimpse into the lives of the Mitchells and other families who settled in Wabaunsee, who were involved in the fight for freedom and the secret activities of the Underground Railroad. —Kathryn Mitchell Buster, great-niece of Maude Mitchell

“While doused with fiction, Dawn of Day also provides a solid history lesson about ‘Bleeding Kansas’. For instance, the famed Beecher Bible and Rifle Church which still stands a few miles southwest of Wamego [Kansas], played a key role in the historic Free vs. Slave debate. It seems only natural for McPhail, a Kansas native, to tackle this literary project. John Willig, her great-great-grandfather, was a charter member of the Beecher Bible and Rifle Church.” —Larry Freeze, Kansas Country Living Magazine [Excerpted from Books Section of Kansas Country Living, August 2012.]

J.A. McPhail, (aka Jeanne Ann, aka Jeannie,) a native of the Sunflower State, possesses a rich fifth generation Kansas heritage. Her great-great-grandfather, John Willig, was a charter member of the Wabaunsee Beecher Bible Rifle Church, featured in Dawn of Day.Born and raised in Topeka, Kansas, the author grew up attending many BBRC Old Settlers Homecomings. As children, she and her brother sang a duet at one of the annual gatherings. Years later, after marrying her high school sweetheart and raising a daughter, the McPhails returned to the church several times, singing with the Messengers Quartet.

During the seven years as her full-time care giver, McPhail listened to her mother, Irma Jean, tell stories about her childhood growing up in the Wabaunsee area. History and family memories, combined with inheriting two Maude Mitchell paintings of her grandparents’ homesteads, inspired the unique blend of fact and fiction used to create Dawn of Day.

As a former editor, columnist, and library director, McPhail has written hundreds of articles and columns for various newsletters, magazines, and newspapers. She currently writes devotions and maintains a reading/writing page on her family’s website, www.jamcphail.com, as well as being a guest writer for her local newspaper.

J.A. McPhail now lives and writes in beautiful western North Carolina. She and her husband, Dennis are also a Southern Gospel songwriting team. But Kansas will always hold a special place in her heart.

Gwen Battis’ love of art began in childhood when she regularly exchanged picture-laden correspondence with her equally artistic cousin. She is mostly self-taught, working with graphite pencil. As an adult, she began to incorporate colored pencils, watercolor and pastels.

Gwen worked as Assistant and Director of the very same Silver Lake Library where J.A. McPhail was director. After 10 years in Kansas and with their two sons in college, Gwen and her photographer husband, Rick, embarked on “The Great Adventure” of freelancing on the road, beginning with a fishing resort off the coast of Alaska and continuing to places they could hardly imagine.

Email the illustrator at: gfbattis@gmail.com

11 reviews for Dawn of Day 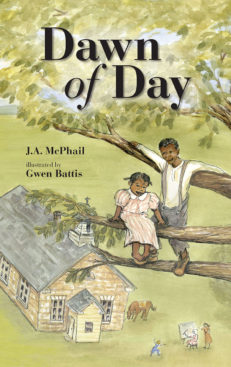