Born and Raised in the Streets of Compton

eBook, Softcover
Rated 4.71 out of 5 based on 7 customer ratings
(7 customer reviews)

A story of ghetto youth growing up in the city of Compton, California, a place where the navigation of daily life is literally, a tightrope between life and death.

A rocking great read! Kevin Lewis has faced his past with extraordinary honesty; all the violence and real life horror is there, building to a spellbinding epiphany. All youngsters—as well as their parents—should read this book and absorb the lessons it provides so clearly.  —Leon Bing, author of Do or Die

Book is also available through Amazon and BN or ask for it wherever books are sold. The ebook edition can be ordered through Amazon. Look Inside

Born and Raised in the Streets of Compton is a true story based upon many events among the urban black youth growing up amidst poverty in the notorious city of Compton, California. This story follows the path of a second generation Crip member, who weaves his journey into the context of the United States sociological history and governmental action that propagated the birth and escalation of gangs and gang violence, now careening out of control.

This work represents the personal history of a young black man’s struggle in the context of racism, poverty, and violence, serving as a valuable historical resource. Included is a report released by the United States Senate Select Committee on COINTELPRO’s activities against the Black Panther Party and Martin Luther King Jr., in 1975, along with another report that outlined a plot to dismantle stability in the black community. Finally added, is a historical break-down of the evolution of street gangs from the 1930s to the present, which includes a complete compilation of gangs and gang territories in the United States as well as statistical material and an extensive reference listing.

“This well-documented research offering has interpersonal appeal and a compelling story line. It is accurate and contains details necessary for higher education perusal in the disciplines of Sociology, Psychology, Anthropology, Communication Studies and Criminal Studies. I would also recommend it for Bible Study and Prayer groups seeking to put their faith into action and intercession. Kevin Lewis exposes one strata of American life all citizens should be aware of. This slice of life has a value which far exceeds the purchase price for the knowledge and wisdom this narrative contains.” —Dr. C. S. Eigenmann, Professor of Communication Studies, Fort Hays State University

“A rocking great read! Kevin Lewis has faced his past with extraordinary honesty; all the violence and real life horror is there, building to a spellbinding epiphany. All youngsters—as well as their parents—should read this book and absorb the lessons it provides so clearly.” —Leon Bing, Author of Do or Die

Kevin grew up in the city of Compton, California, during a time when civil rights and neighborhood self-help organizations were on a rise. It was also a time of struggle which was evident by a war which was raging between the Black Panther Party, The United Slaves Organization, and the FBI. During this time, Kevin had envisioned himself being a Black Panther, but his dreams were cut short by the activities of COINTLPRO, an F.B.I. counterintelligence program designed to disrupt and  discredit domestic groups of the 70s.

In 1972, Kevin officially joined the Crips after the death of an admired comrade. His involvement with the Crips took him on a journey of self-destruction. Several times during his young life he found himself incarcerated in the juvenile system. In 1987, after traveling from state to state proliferating gang violence and selling drugs, the doors of freedom finally closed on him. He was sentenced to more years than he could count for drug sales, attempted assaults, burglary, and other hideous crimes, but in September 2002, Kevin was released from prison in the State of Oregon.

After Kevin’s release from prison he returned to California where he attended California State University, Dominquez Hills. He earned his bachelor degree in Sociology, and moved to the State of Kansas in an effort to separate himself from the gangs and drugs that still permeated and overwhelmed the city of Compton, California. Before leaving Oregon, Kevin worked with several organizations dealing with the problem of gangs.

In August 1993, Kevin Lewis appeared on the front cover of the Sojourners Magazine attending the Urban Gang Peace Summit held in Kansas City. This summit was a nationwide call to peace and gang members and leaders from 26 cities converged on Kansas City calling for an end to gang violence.

Kevin’s latest endeavor has involved the creation of a nonprofit program assisting youth at risk of gangs and drugs. In his words, “I was once a part of the problem, now I stand as a panacea to the problem.”

Kevin now resides in Kansas, with his wife, Chasity, who has been a big inspiration in his life and his continued driving force for positive change.

7 reviews for Born and Raised in the Streets of Compton 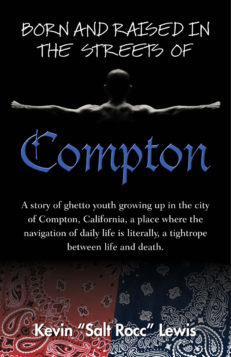