Pendulum of the Sun

eBook, Hardcover, Softcover
Rated 5.00 out of 5 based on 2 customer ratings
(2 customer reviews)

After colonizing the planet Iska for two decades, humanity struggles to survive. The planet has severe seasons, malicious beasts and natives with strange powers.

Book is also available through Amazon, BN, or ask for it wherever books are sold.

Astronomy gets pulled into this world after going on a rescue mission with a brilliant young mechanic, a mercenary, a mysterious woman and an exiled beast. They are aided by a being from the natives’ lore, a being which was said to have been around during the near destruction of Iska. His interference makes them question the severity of the situation and fear that their world could be headed down the path of its final destruction.

Alexandra Ames was born and raised in the Kansas City area. She has been drawing and illustrating since she could pick up a pencil and coming up with stories before she could write. Mythologies, artwork, and music from different cultures help inspire her stories along with her passion for history and the natural world.

2 reviews for Pendulum of the Sun 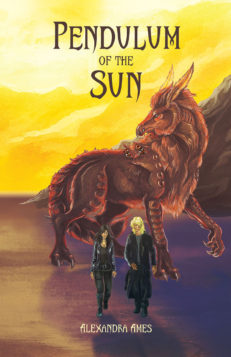