The previously unknown 4th Little Pig, Herman, escapes the Big Bad Wolf and finds himself on a tropical island where he must learn to build a good shelter in order to survive the Big Bad Storm.

“No problem is insurmountable with perseverance!”

HERMAN, THE FOURTH LITTLE PIG tells the tale of the previously unknown 4th Little Pig. Herman escapes the Big Bad Wolf and runs to the coast, where he takes a sailboat to a tropical island. He first builds a small shelter out of palm tree leaves, but it gets destroyed by a storm. He then builds one from bamboo, but it also gets destroyed by a storm. Finally he discovers a cave on the island, and survives the biggest storm yet. A new spin on a classic tale of trial and error.

“Out of the frying pan and into the fire! In this new take on the beloved children’s classic, Herman learns the hard life lesson that running away from a problem never really works. Although he succeeds in escaping his brothers’ wolf drama, he quickly realizes that even desert islands come with issues. This entertaining tale teaches readers that no problem is insurmountable with perseverance… and a little coffee.” – Marissa Moore, Elementary School Librarian

DAVID WARD is the husband of a Kindergarten teacher, the father of four, and a grandiose Home Improvement DIYer, but he’s also been a graphic designer, web developer, artist, art TEACHER, and a singer AND guitarist for Rock Band and Guitar Hero. He does his best writing and illustrating with a nice cup of hot coffee and a freshly-sharpened #2 pencil to draw with.

Be the first to review “Herman, The Fourth Little Pig” Cancel reply 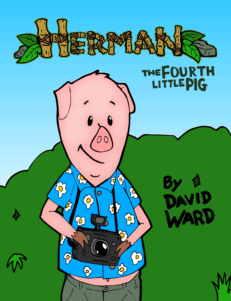 You're viewing: Herman, The Fourth Little Pig $12.99
Add to cart