Forgive You Father, For You Have Sinned

Many of us wonder why we continue to live the lives we have fallen into. Follow Sam Hallor’s journey to see whether he can change his story to become the person he has always wanted to be. But, can he really change his story? Forgive You Father, For You Have Sinned is also available through Amazon and BN or ask for it wherever books are sold. The ebook version of this book can be ordered through Amazon Ebook.

Forgive You Father, For You Have Sinned: Changing One’s Prescribed Life, to an Authentic Life

This is the story of Sam Hallor, brought into this world as Seamus O’Halloran, of Irish Catholic descent. If one accepts their heritage, this begins their story. For Sam it is a sad story. When he is a few months old, his father opts out of his unwanted marriage and a father, and chooses a life of a bum living in the back room of the local Irish Pub.

Sam grows up in an Irish Catholic neighborhood of Little Dublin in Brooklyn, NY. His family is poor, and as soon as he is able, he has to fend for himself. In his teens, he becomes a numbers runner for the local bookie, and at age 18, as college is not a financial option, he accepts an apprenticeship with the neighborhood plumber. This becomes the start of his new life and story. He changes his name to Sam Hallor and becomes Sam The Plumber.

Sam runs from ‘the sins of his father.’ He is intent to erase the memory of his father from his mind, and those of his neighbors. When his father falls in the gutter on his face, Sam places him in a nursing home, not out of empathy, but so he can witness first hand his father’s demise and agony; as payment for his sins.

On one of Sam’s visits, he finds his father lying on the floor of his hospital room. Trying to help, Sam falls and bangs his head into unconsciousness. He wakes up to discover that he is a “person of interest” in his father’s death. Sam may be a murderer.

Many of us wonder why we continue to live the lives we have fallen into. So, follow Sam’s journey to see whether he can change his story to become the person he has always wanted to be. But, can he really change his story?

The sins of the father cannot be erased by the son, for no matter how far away he can run, and wherever he goes, the sins cannot be undone.

Praise for Forgive You Father, For You Have Sinned

“Rob Reider has done it again, offering us a story that might echo more about the private people we really are than we care to admit in public. Cathartic and honest, terrifyingly poignant, Forgive You, Father ultimately led me back to compassion and forgiveness. I hope it does so for you, too. One remarkable thing about Rob’s social issue novels is that they attract such a wide range of viewpoints. Telling it like it is, this is a powerful read.” —William L. Protzmann, President, Music Care, Inc. and Motivational Speaker

“An important message for any life situation wherein the commitment supersedes the development of a life beyond that of the chosen path… A cry for balance in whatever endeavors we pursue.” —Ed Merewether, Vice president, TMC Services, Inc.

“Like Jacob wrestling with the Angel/God in Genesis, Reider wrestles with great existential questions. He is able to couch these conundrums in a tale wherein his characters play out an archetypal drama that is compelling and expertly stratified. It is simultaneously a story, a mythos and an exegetical inquiry into the human exploration of spirituality; a fascinating read. Like Jacob he wins the match.” —Bonnie S. Bostrom, Writer, Artist, and Author of The Wayshowers, Women Facing Retirement, Quicksilver Dreams, Buddha Nature of the Southwest, Image and Word, and a recent memoir Born Crazy

“Reider provides an easy to read and entertaining methodology to create groups that focus on making necessary changes in today’s political and economic atmosphere. As a somewhat recovering Catholic (you can never get away from it entirely), Reider is right-on as to the dilemma of putting your faith in God’s will, as opposed to putting your faith in your own free will.” —Romeo Portillo, Chief Operating & Financial/Operations Principal, RH investment Corporation

“Beyond an ethnic odyssey, Reider creates a life odyssey for all people, regardless of each one’s origins and internalized belief systems. This is an impressive work of fiction, and personal and social discovery. Reider takes you to the depths of each of our own back stories to examine how we became who we are and the possibility of changing our stories to become who we want to be.” —John G. Smithyman, Former comptroller, City of Philadelphia

“In Rob Reider’s latest book, Forgive You Father, For You Have Sinned we journey through a world seen mainly through American Irish Catholic lenses. The characters portrayed in the book are personal reflections upon a life filled with struggle and redemption, which is, after all, a story that we all share.” —P. Nisbet

“We are three Irish lassies who have each grown up in a different tightly controlled and closely knit Irish Catholic ethnic neighborhood on the East coast. We met after each of us experienced an upbringing of pressure to become an obedient child at home and at our different but similar Catholic parochial dogmatic schooling. We now consider ourselves lapsed and recovering Catholics. Rob Reider’s book says it all for us; from the making of an Irish Catholic back story, to a female surrender to male supremacy, to becoming stuck in our story, and ultimately overcoming our inner demons and becoming who we were meant to be. A must read, regardless of your ethnic and cultural background.” —Three Irish Catholic Lassies, who no longer do masses, and wish to remain out of sight, for they just might be right!

“As an organization that works together with others to build and create sustainable and self-sufficient communities, we found Forgive You Father, For You Have Sinned right on. That is it vividly depicts the positive value of community and the aspects of preserving such communities. As many of us have moved away from such neighborhoods looking for a better life elsewhere, we may have abandoned the positive values that community brings to our hearts and souls. Reider’s book is a refreshing look at what we may have sacrificed as we have moved away from such neighborhoods.” —Those of us at community-unity.com

Dr. Rob Reider; Ph.D., MBA, CPA, is the President of Reider Associates, a management and organizational consulting firm located in Santa Fe, New Mexico, which he founded in 1976. In this capacity, Rob is a nationally recognized management consultant, author, speaker, and seminar/workshop leader. He has also been a presenter at numerous professional conferences, seminar/workshops, and in-house programs. Rob is also the course author of over 20 different online self-study courses. In addition, he is the author of six other works of fiction and nine professional management books; and has published numerous articles in professional journals. Rob lives in Santa Fe, New Mexico with his wife Barbara. He can be contacted by e-mail: robreider1@gmail.com

Be the first to review “Forgive You Father, For You Have Sinned” Cancel reply 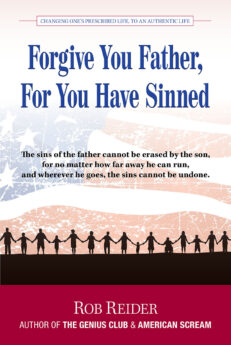 You're viewing: Forgive You Father, For You Have Sinned $16.95
Add to cart