The Major League Baseball season is an annual drama that begins when pitchers and catchers report to Spring Training and ends amid a flurry of confetti and hysteria. But that’s only part of the story.

Big League Life is also available through Amazon and BN or ask for it wherever books are sold. The ebook version of this book can be ordered through Amazon.

The Major League Baseball season is an annual drama that begins when pitchers and catchers report to Spring Training and ends amid a flurry of confetti and hysteria.

But that’s only part of the story.

It’s the people that make baseball such captivating theater. Athletes from different backgrounds, each on their own path, come together for nine months to determine whether they have the talent, chemistry, and dumb luck required to parade through the streets when the games are over. Big League Life, a work of fiction, follows the journey of one such ball club and celebrates the personalities and characters one might find at work and play both within the confines and far afield of Major League ballparks.

Professional baseball unfolds on palatial fields held captive within cement and steel; ballparks are at once beautiful and imposing. However, people – flaws and all – make America’s National Pastime a beautiful game. This is their story.

“After 20 years in baseball, you would think I would know everything there is to know about the industry. But the clubhouse is a sacred place, even for front office fixtures like me. I found myself immersed, enlightened, and entertained by Chip’s authentic portrayal of a year in the life of a fictional Phillies team and the many unsung heroes and heroines that surround them.” —Bill Schlough, San Francisco Giants’ CIO and Chairman, San Jose Giants

“Big League Life has everything a baseball book needs, with plenty of unexpected twists. The author’s character development is creative and insightful. It’s a great book to read during the season, or better yet, in those dark days when the world is devoid of baseball, just to get a baseball fix, like I did. Add it to your baseball book library and you won’t be sorry.” – Chris Knabenshue, Philadelphia Phillies’ scout and retired outfielder

“Chip Scarinzi has written a beautiful baseball story, full of the highs and lows and day-to-day drama of a season. As the story unfolds, the reader is introduced to the many layers and personalities that form an inside look at life in the big leagues. A most enjoyable read and recommended for any fan of America’s pastime.” – Ken Korach, Oakland Athletics’ broadcaster and author of Holy Toledo

“With Big League Life, Scarinzi immerses readers in the life of a Major League team, starting in the preseason and continuing all the way to the postseason. As the story of his fictional club unfurls, Scarinzi taps into the hope, frustration, redemption, joy, and heartbreak that the game’s most magical seasons evoke. His characters and their team bring to life those qualities that led so many of us to fall in love with the game in the first place.” – Josh Pahigian, author of The Ultimate Baseball Road Trip and The Amazing Baseball Adventure

“A delightful journey onto the diamond, through the dugout, and into the lives that shape a Major League ball club. The author wonderfully navigates a team’s many personalities and offers a glimpse into the beating heart of today’s modern game.” –Scott Butler, author of So You Think You’re a Philadelphia Phillies Fan?

Chip Scarinzi is an award-winning communications executive by trade and a dyed-in-the-wool baseball fan at heart. A lifelong Philadelphia sports fan, he lives with his wife and two young daughters in the shadow of the Oakland Coliseum in nearby Alameda, Calif. Scarinzi’s first book, Diehards: Why Fans Care So Much About Sports, was the manifestation of his own passion for sports and a desire to understand why he and his tribe care so much about games. While a work of fiction, Big League Life is the result of years of research interviews, and first-hand accounts provided by several men and women who call the “big league life” their life.

Author can be directly contacted through:

Be the first to review “Big League Life” Cancel reply 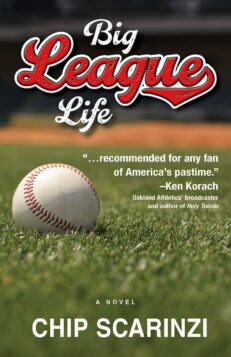