View cart “A Home in America” has been added to your cart.
Eunice Boeve

A Home in America

The Mueller family, descendants of the Germans who settled the Volga River area in Russia in the mid-1700s, turn to America to escape Russia’s enforced military service.

A Home in America: A Volga German Story is also available through Amazon, BN, or ask for it wherever books are sold. Look Inside

A Home in America: A Volga German Story

Told through the eyes of twelve year old Eva, the story chronicles the hardships of their travels by land and sea to America and their resettlement on the Kansas plains.

Congratulations to Eunice Boeve! A Home in America: A Volga German Story has been awarded the status of “Recommended” by the Reading Circle Commission of the Kansas National Education Association – 2018.

“The topics in this book open up opportunities for expanded study. Our town and surrounding area are heavily influenced by the Volga German heritage and we are excited to explore it.” —Hoisington Middle School, Kansas

Eva Mueller is twelve years old when her father announces that the family is leaving Russia and immigrating to America. Although they have lived in Russia their whole lives, they have always considered themselves Germans who live in Russia. In 1763, the Russian ruler, Catherine the Great, sent her representatives to Germany to offer land along the Russia’s Volga River for settlement. War and the ruling class had kept the average German citizen in poverty, and with no hope of a better life, they jumped at the Russian ruler’s wonderfully, generous sounding offer. Not only would they have their own land, they were told, but there would be housing for all, and horses and plows so they could immediately begin working the land. However, when the first group arrived, they found no houses, no horses, or plows, but there was plenty of land. The trouble was, this vast open grassland on the Volga River was peopled by nomadic tribes who swooped down on horseback, killing men and capturing woman and children. But with no place to go, no means to return to Germany and nothing there anyway, they dug in and stayed. By force of will, muscle, and faith, they carved out a life on these Russian plains. But, although they lived in Russia, these strong-willed people chose to remain German and they clung to their language, customs, and religion as fiercely as they tamed the hostile land. In the beginning, they were promised total freedom, and so it was until Russia began a forced military service of males aged sixteen to forty-five, and many began to see the handwriting on the wall. Looking to relocate, scouts were sent to the Americas, both North and South. They returned with glowing praises for both countries, and over time, those who could manage the fare, especially those who had family members in either country, packed up and left, most of them going to America.

The Mueller family relied, as many did, on a family member already in America to loan them the fare. This family member had left Russia five years before in 1888, and now lived at Herzog, Kansas, a Volga-German town with other predominately Volga German towns nearby. Eva is heartbroken at the thought of leaving Great-Grandmother who has been like a mother to her since her own mother died giving her birth. But Great-Grandmother, 92 and now blind, could not survive the difficulties of such a journey. So leaving all they knew behind, the family set out for the promise of a better life in America. However, if one is to adapt to this new country, there are changes to be made, especially for those who have always lived among their own kind with a mutual language and heritage.

Eunice Boeve, who was born and raised in Montana and Idaho, has spent nearly all of her adult life in Kansas. She writes for both adults and children usually in the genre of historical fiction. She and her husband raised four children and also have five grandchildren. In addition to her family, she loves books, the outdoors, and writing stories.

10 reviews for A Home in America 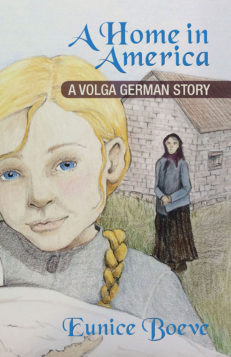